Biden visited Kenosha, Wisconsin to instill calm.  Biden greatly calmed the residents of Kenosha.  How?  Well, by leaving a wake of disappointed, befuddled participants in his calming exercise of calm.

How to know it was calming in a calm manner?  Why the bluecheckmark media has come together in a totally organic, spontaneous manner to promote the hashtag BidenCalm. One Biden Flack pointed out that being calm was something that Trump never has done.

Sadly, the twitter hashtag for Bidencalm has died a sad death while the Bidenriots hashtag obviously remains alive and well, despite being a victim of twitter censorship.
How did Biden achieve this presidential level of calm? By calmly and helpfully pre-scripting his questions for the becalmed residents of Kenosha.

Participant speaking to Joe Biden at event: “I was told to go off this paper, but I can’t” pic.twitter.com/SHhAzOvzDo

This had the effect of calming the local democrats seeking to be calmed by Biden.  But seriously, the guy has been reading interview questions off of teleprompeters and now he’s forcing the nice people who come to see him read him questions off of piece of paper.  The purpose of doing this is to keep Biden on point, to have a teleprompter answer ready to go.

But the problem with Biden’s messaging…aside from the whole “biden supporters and running mate support rioting until it turned out to be polling badly” thing is the actual point being made.  That somehow Trump committed an act of pre-crime by reacting to the Biden Riots which then, no follow me here, caused the riots in the first place.  Ugh, the only saving grace for the fake news and Biden PR team is that maybe most people really don’t know about BLM and antifas rioting.  Maybe it’s all new to them and they’re open to suggestions. But it’s a strong leap to suggest that Trump’s crime of being orange and therefore bad was enough to cause three months of rioting in his fourth year in Office.

Joe Biden’s exit was even less enthusiastic than his arrival at #Kenosha Grace Lutheran. No cheers. No noise. Very underwhelming. pic.twitter.com/cQdeJSXt7b

You have to admit, the actual Biden method of calming a race riot by Marxist agitators that burned a community to the ground is a bit…unique. Biden repeated several lies insinuating, if not outright slandering, President Trump as some sort of racist racist who admires racists. Scott Adams terms this the Asshole Biden gambit…going with the greatest lie in American politics. So, yeah, real calming.

Asshole Joe Biden’s first sentence is the biggest lie in American History. His second sentence is accidentally accurate — no president said that. https://t.co/kjMe2TChst

Of course, Biden babbled incoherently about other things, noting that his plans were left in his other pair of pants back in the basement.  It’s not even clear that Biden visited any people whose businesses were destroyed by the riots.  He did visit with the father of the latest person to resist arrest to no good end, Jacob Blake who has some rather …interesting ideas about things.  But calm ideas.  Things that no one would burn a city over.

So, if you’re a Biden hack or a media bluecheckmark who wanted to try to replace the Biden Riots hashtag with the …uh…I guess focus group approved hashtag of Biden Calm, it kind of worked thanks to the stunned silence of those who got to witness Joe’s calming action at work.  But the hashtag seems to realistically be Biden Crickets.

Of course, at this time, no one can confirm or deny whether any young girls were sniffed, snuggled, or propositioned by Joe. 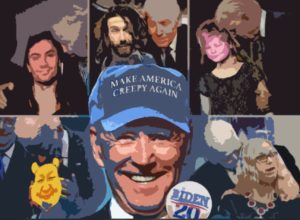