Red Checkmark editors have put together our Top 47 List of reasons to vote for Joe Biden or Donald Trump for President for 2020.

Some people think that Joe Biden and Kamala Harris are the best ticket to vote for in 2020. Some believe that voting for Joe Biden and Kamala Harris to kick Donald Trump out of the white is a patriotic move. Perhaps you will still think so after reading our top 47 lists of reasons to vote for Joe or perhaps you too will be stunned by this list covering 47 years of Joe Biden’s track record.

Some folks may not realize it but Biden has told quite a few lies in his day. Biden has also had his share…47 years worth…of cringeworthy moments. In light of the lefts’ zero-issue election strategy in which Biden can comfortably campaign from his basement once every couple of days, it’d be helpful to set up a comprehensive list of 47-ish lies and cringeworthy events in Biden’s public life that we can focus on while the left and the fake news try to figure out how to hide the fact that Joe Biden used Hunter Biden to sell access to American policy and money in exchange for money, as one does. In this case, as one does, is pay Hunter Biden to sit on the board of various companies receiving many clams in exchange for not doing nuthin.

Joe Biden has been in politics for 47 years. Raise your hand if you think he’s saved an idea for year 48.

So, starting a list of Joe Biden’s Top 47 Cringeworthy moments and Lies you got to start with number one.

Some of these you know by heart, some are so typical that these trees got lost in the forest.

Number One. Joe’s touchy feely behavior for the ladies (and babies) of all ages.

Biden is a bit strange with the ladies. 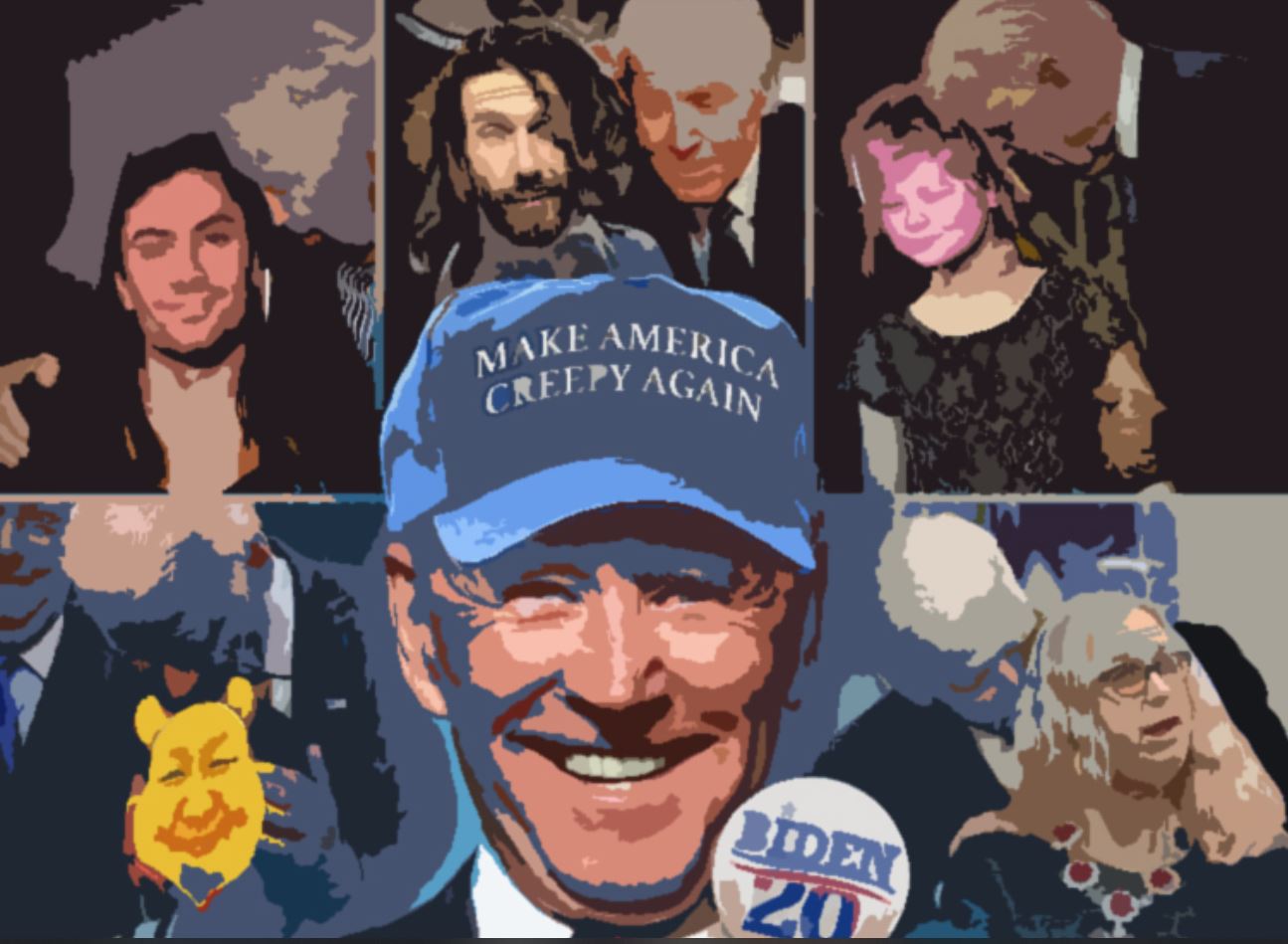 No…I mean…this is not good.

Ok, we got that out the way? You still like him? You’re still like “but uh trump engages in locker room banter.” Comparing rotten apples to some boys will be boys banter? C’mon on man.

Notice any differences? Nothing jumps out at you?

2. he did not graduate anywhere near top of his class
3. he was not on scholarship
4. he is not a professor who teaches law

“So Biden just said ‘when I left the United States Senate, I became a professor at the University of Pennsylvania.’

That’s not true. He never taught a class.”https://t.co/6eWhYpN3Wi

5. he is not Neil McKinnock…if you need to look up this reference, then here, use the historical archives.

6. Joe was not first person in his family to go to college.

Sad Pandering
7. Joe biden said he attended a black church as a kid…uh no.
8. Joe Biden said “he got his start” at Delaware State, the implication that he went to a HBCU. Uhn no.

Joe Biden has repeatedly claimed he was a student at Delaware State University.

The university has come out and said he was never a student.

9. he told black people they weren’t black if they vote for Trump.
10. Akkshually, Biden did not live in section 8 housing.

11. That time he confronted a guy and told him to “listen, fat”
12. The time he told one guy who questioned him that he has a much higher IQ…when he was confronted about his law school record.

13. That time he challenged a union worker to push ups when he asked him about appointing Beto O’Rourke as gun czar.
14. That one time he doesn’t sniff this girl’s hair and instead calls her a lying dog faced pony soldier. That’s classic Biden!

15. He called our military stupid bastards.  It’s on video tape.  You may say that’s unfair but this is how we argue now…considering point 31 down below.
16. He committed adultery with Dr. Jill “the doctor” Biden when they started dating because she was still married.
17. There was that weird, cringe story at the Biden Townhall where he clearly made up a story about his dad and him having a special moment appreciating man-man love in the 60’s.

Pure Bull Sh**.
Apparently, Biden’s dad, in 1962, was totally woke.
This is the most ridiculous lie I’ve ever heard in my life. pic.twitter.com/VlNOFrGWIt

18. He loved Strom Thurmond, known as one of the greatest racists in American History.

19. That time Biden claimed would “beat the hell out of trump” for disrespecting women…Tara Reade was not available for comment.
20. All those times Joe swam naked in front of female secret service agents.

21. handing that girl the question to read at the Kenosha Townhall…

Participant speaking to Joe Biden at event: “I was told to go off this paper, but I can’t” pic.twitter.com/SHhAzOvzDo

22. on mental acuity tests…what are you on crack?
23. Be careful what you call other people because…oh right, he too got a deferment from Vietnam.

Documents provided by the Obama campaign indicate that Mr. Biden received a classification questionnaire in October 1963, when he was enrolled at the University of Delaware, and received his first 2-S student deferment a month later. More deferments came in roughly 12-month intervals, the last in January 1968, shortly before he graduated from law school at Syracuse University. In April 1968, when he was 25, Mr. Biden was disqualified from service because of asthma.

24. That debate with Paul Ryan???  Man, that was crazy. Crazy debate performances is Joe’s thing though.

I think we can dispense with the myth that Joe Biden is a nice person. Basing his campaign on the Fine People Hoax proves he’s a sociopath and an asshole.

26. When COVID is a serious health issue, infecting millions of people and causing 200,000 people to die (which was Dr. Birx floor as a best case scenario), why is Joe lending to panic and hurting science by repeating the silly lie that Trump said people could “drink bleach”?  It’s clear that Trump was referring to actual therapies that were in development.  Oh well, if all you have as a campaign strategy is hysterical overreaction to the things you imagined Trump said, you may as well call a lid for the day.
27. You know, on the whole Sundowner Joe issue, I just have to include whatever Joe Biden was trying to say as a cringe/lie especially when he said about ending rich people tax loopholes in first debate and in interviews.  He’s not going to end depreciation or carried loss deductions.

31.  The center piece of the Biden 2020 campaign is to hysterically overreact to things Trump never said, here he is repeating literally the dumbest, non story that Trump somehow made fun of dead WWI soldiers buried in France.
32. That time Joe Biden coarsened our discourse by saying that Trump is like Goebbels.
34. He had a campaign ad calling Rittenhouse a white suppppers.  Actually, Rittenhouse was being attacked by Biden’s Looting Maniacs in Kehosha.
35. It turns out in 2016, Biden failed to respect the peaceful transfer of power when he brought up the Logan act to get General Flynn.
36. The times that he plagiarized Trump’s covid plans.
37. Similar to point 28 above, that time in first debate, said trump helped Iran get nukes.
38. Whoa boy, can you believe Biden said 6000 military members died from covid when it was actually 7.
39. There was time he went insane and said trump could’ve prevented all covid deaths by not tweeting (or I guess inventing the cure in mid January).

40. So can someone tell us whether he is/is not for the green new deal?
41. When Biden’s Rioters started polling poorly he went from saying he would defund police to his bizarre line of attack that, unlike Trump, he would over fund police. What?
42. He said that anti-fa is just an idea.
43. He advocates the police to shoot people in the legs.
44. You know, you may have heard about the time he bragged about how he got Ukraine to fire his son’s prosecutor threatening to withhold US taxpayer money.

Joe Biden said he is “not a fan” of court-packing, but whether he ultimately seeks to push for more seats on the Supreme Court depends on how Senate Republicans handle the confirmation process of Amy Coney Barrett https://t.co/gPfE8MM9Zo

46. Benghazi lies…Biden added to the Obama administration’s astonishing pile of lies surrounding the events at the American Consulate in Benghazi.  You’re either aware it was a straight up attack or you think some video on the Internet spurred Libyans to spontaneously uprise and kill Ambassador Stevens.

As Jennifer Rubin wrote the month after the 2012 attack, “Biden adds to the Libya lies.”

“Was he really so clueless that even now he didn’t know what had occurred?” https://t.co/iJFqnkWl7W pic.twitter.com/f52izGxHCb

47. Why not save the best for last and discuss Polifact’s lie of the year: Obama’s like plan/keep plan…Biden was and remains complicit.

No, look, the fact is that what I’m talking about now is that when – because I get asked the question – since, what I do is I’d add a public option to the existence of Obamacare, meaning that a Medicare-like option is available if in fact you – but there’s 160 million people out there who’ve negotiated a health care plan with their employer that they like and they don’t want to have to give up like Medicare for All requires. It says you have to give it up. You cannot have any private insurance.