Judge Sullivan has taken matters into his own hands.  After watching the Sally Kohn show one night, he showed up to court the next day and decided that justice dictated he expand the penalty for Gen. Flynn based on what he heard.  So, instead of a 1 day suspended sentence for “lying” to FBI agents that haven’t even told Flynn or the Court what happened in their interview, Sullivan decided that “dammit, this whole FARA nonsense” needs to be addressed, even though it was not part of the legal pleadings.

First, as we know from My Cousin Vinny, the prosecutors are supposed to give “discovery” to the defendants. That would include the basis for the criminal charges. Flynn, however, wasn’t even given these documents.

So, what this little thing means is that during the pre-trial negotiations between Flynn’s attorneys and the government, this guy Van Grock decline to give the 302 … the thing that would be the basis for any Flynn prosecution to the Flynn team.

This is the reason why Flynn got bled dry by his attorneys.  Instead of saying “screw you, see you in court” to prosecutors that apparently weren’t about to give over the information that they would use to prosecute Flynn, they spent months negotiating with the DOJ to accomplish nothing.

At the end of this, Flynn was given some hard choices which boiled down to cooperate with some bullshit stuff about Turkey, register as a FARA agent, and plea guilty to something or another.  Each of these issues took $1000/hr attorneys a couple of months to resolve … mostly because they let themselves get strung along by the DOJ.  And probably because the DOJ threatened to go after Flynn’s son if he fought too hard.

Anyway, stuff that we can go into later lead to the sentencing.  But Sullivan had other ideas.  It wasn’t enough. He had watched Maddow and she was pissed.  Sullivan aped her theatrics the next day.

Just a reminder that Sullivan’s rant on the aborted day of sentencing mirrored Rachel Maddow’s monologue from the night before. pic.twitter.com/lVOiro9RCb

Anyway, Judge Sullivan’s shitshow lead to the eventual change in leadership of the people prosecuting Flynn, the leadership appointed a special prosecutor to dig through the prosecution to assess the conduct of the DOJ and FBI.  They found tons of exculpatory evidence was withheld from Flynn.  At the time, because of Sullivan’s insane Maddow based rant, the whole proceedings stopped while both the DOJ and Flynn tried to figure out what to do.  So, it was at this stage in the prosecution that, after reviewing the information that was withheld, the DOJ decided to withdraw their charges.

In response, Sullivan decided to prosecute Flynn himself via an “intemperate amicus”…and a whole lot of legal fur has flown because of it.  My analysis has been that this amicus, a retired Judge Gleeson, an intemperate crank of a batshit insane crazy liberal was to use his ill-defined powers to get to the bottom of this, that Barr=Trump=Orange=Bad would show that the dismissal was bad, and therefore something something and Flynn should go to jail.  Basically, there are three trial judges in the DC CIR that are cray cray.

this is a whoa.

The trio of DC CIR trial judge clowns are …kinda maybe?…being brought to bear for their clownery.

Judge Walton looking for the hidden portion of the Mueller report.
Berman Jackson for being a trainwreck with Roger Stone
and…
on point:Sullivan’s amicus crap pic.twitter.com/j5CZduVR0N

Anyway, I have had much to say on this but the upshot is that discovery is still ongoing. Instead of finding some sort of bizarre influence…you know the President who is boss of the DOJ, that sort of untoward influence…the DOJ is finding more and more crap from the previous DOJ/FBI lunatics that tried to get Flynn.  Why get Flynn? Because if he had more than 3 days in office, he’d smoke out what the DOJ/FBI/Swamp lunatics were doing…you know, framing trump and friends.  So let’s go over what was released today.

Oh, my dear Lord, you must read this: https://t.co/qD5k6XUYbS

Just another traunch of  exculpatory docs while Gleeson looks around for the hidden Russians.

So, unlike Gleeson, Jeff Jensen, the cleanup guy figuring out what the DOJ did wrong is actually empowered to interview people in the DOJ, particularly William Barnett, an FBI agents who apparently had some insight into the Flynn setup.  Let’s see what he had to say.  After months of being part of crossfire hurricane, Barnett found little to nothing of importance. In November…

As we learned from other disclosures, the FBI had no derogatory info on Flynn and the case should’ve been closed, but Strzok had found it still open due to apathy.  But actually, strzok had said to close it and it was being wrapped up in Dec 2016.

So, then, Strzok kept it open for Jan 2017 and there was the ultimate interview with Flynn which Barnett was not informed of.  There are a couple of pages of discussions of what happened around that time but I didn’t find it interesting one way or the other.  So, by page 8 of this doc, Barnett is still of the opinion Flynn was not a ruskie spy, the logan act was stupid, and there was no derogatory info on flynn…

It gets interesting when Jean Rhee, a very stable liberal gal no doubt, turned out to be obsessed with Flynn.

Haha…”no I don’t think we’ll be working together, you hag”

Anyway, Strzok pushed the issue, wanting Barnett to work on the matter but Barnett resisted, only relenting to avoid group think in the group of lunatics who were obsessed with Flynn.

Ok, then the SCO …the Weissmann witch hunt being figure headed by Mueller…got started and Barnett noted they were nutso anti-trump.

So then Barnett describes the Weissmann witch hunt MO, if you don’t say what they want … that trump is bad and illegal, then you are lying.  Barnett does try to prevent “group think” by noting the SCO lawyers never asked follow-up questions, important if you want to do a 1001 “lying” charge.  and that Weissmann is nuts. batshit insane. 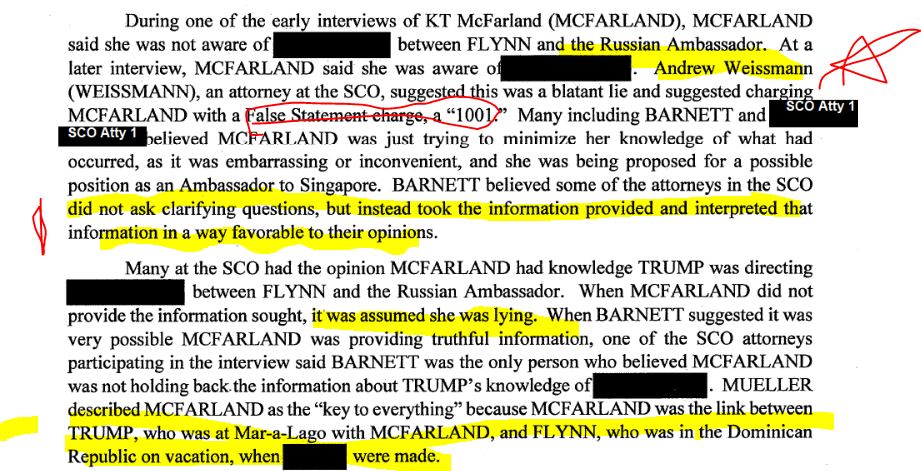 Here’s some interesting insight. Barnett notes that typically, the process in these sorts of things are pushed by investigators, here the Mueller Weissmann witch hunt pushed things top down, the investigators were seen as hindrances.  That the attorney pushed and pushed to get some sort of anti-trump narrative established. 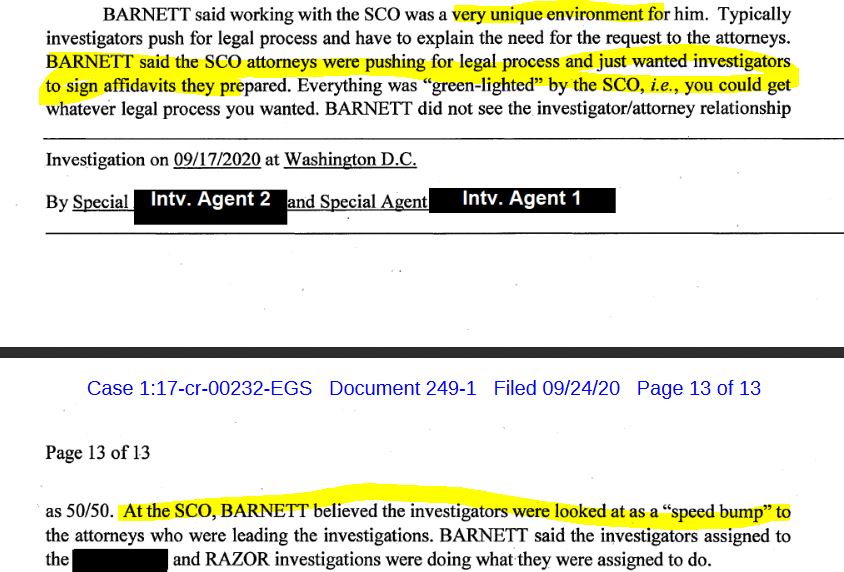 that is interesting, it shows the insane bias, the evidence free bias and the legal theory free bias too. Anything to stop them, even Trump talking to lawyers, may be obstruction.  Everything Trump said was reorientated into some sort of quasi illegal statement.

So, the Weissmann team was full of nutters. It was clearly an evidence free impeachment hunt.

Yes, it was clearly a side hobby of some swampers like Strzok that grew and grew as Biden/Obama acolytes got on board, from Jean Rhee to Susan Rice’s cover her ass memo as Biden and Obama discussed the Logan act and other gotcha tactics in the White House.

consider Rice, and I’m not sure this is it, but she makes it clear that Comey never ever told her about investigations. contrast with by-the-book memo

in more transcripts, like Powers/Yates,they’re so evasive, their testimony is worthless, but hey good luck with Grand Jury docs. pic.twitter.com/i6wt464SwI

Anyway, there’s more, a while back, the various Russian Hoaxsters got to testify under oath. And they had nothing.

Yate’s useless though,completely eel-like.
she did admit Logan act was considered silly.
Gowdy:do you have evidence?
Yates:Is intel evidence?
G:sure,consider both.
Y:I read in WaPo that 17 intel agencies have evidence.
G:uh but do you have?
Y:I cannot recall if intel was evidence pic.twitter.com/LgKnMDHn3R

but this interview is an interesting insight into the whole mess, how it went from Strzok’s hobby to Weissmann’s coup attempt.  But thanks to Judge Sullivan’s lunacy…this process got to go on and on.

and it looks like there’s more stuff to read…

🚨🚨New exculpatory information in Gen Flynn case – FBI Agents KNEW the Crossfire Hurricane investigation was way outside of any normal bounds – and told each other. pic.twitter.com/bykIXQ1X1O