Mitt Romney.  What can you say about Mitt Romney. Once the hope of the party, he has now become a swamp creature that poses as a Republican. You wonder if there’s a good payoff for his six years as a Senator whose sole purpose has been to undermine the party.  There’s a particular member …well, not member…let’s say leader of the GOP that sort of floats into the election based on connections, disinterest, cunning, or family connection who once there serves to continually bash the base.  These swamp-republicans serve the purpose of bemoaning how awful the party is…and this awfulness is a litany of leftwing talking points about their stereotypical republican.

Jon Huntsman was another one of these bizarre creatures.  His lament was that the GOP was full of anti-science voters who just couldn’t science and that’s just sad because science is the most important thing. Other swamp-republicans exist to talk shit about Trump.  Here, we have Romney:

You see the same talking tripe from all the bought off never trumpers, leftwing talking points about Trump. Just tick through the list, anti-vaxxers, white supremers, and oh my…there’s fa-fa.  I guess he had to throw that in there. You read this thing, you realize it’s probably about QAnon. I’ve never read a thing about QAnon…I know it’s the sort of thing the deep end of places like Zerohedge go on about. But here’s the thing, if you don’t look for it, you don’t know what the fuck it is.

They have conspiracy theories?  No shit.  Welcome to the Internet. Welcome to America.  Welcome to the world.  Try googling JFK and umbrella man.  Only today we have trump and nodding woman.  So, this QAnon, let me see, do they burn down cities?  No?  Well, then why are they dangerous? From the Trump Townhall, we get the idea that they talk about something something demons ??? and … let’s just say other stuff.  Other stuff being things that make search engines very sad…but Qanon is apparently the anti-this:

Yeah, evil stuff being against that.

So, what’s really going on here?  First, don’t bother deciphering Romney’s word salad. You just need to know it’s the typical path… QAnon=Trump=Orange=Bad. It all leads back to bitching about trump using lefty talking points.  Other people will point out Trump already said fa=fa is bad and that WS is bad.  I’m not going to repeat things everyone has already said, I’m providing new content here. Trump’s more concerned with rioting and public, race based humiliation squads. 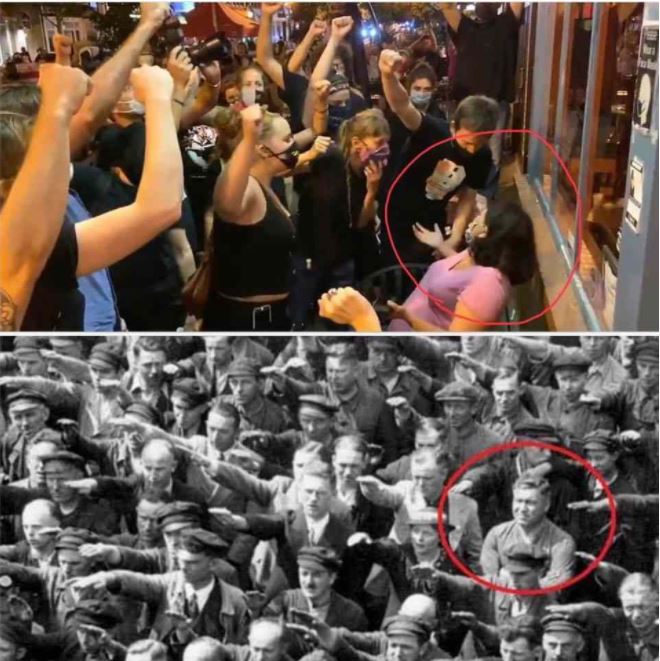 You get the point.

What is really going on here is the GOP’s typical ANTI-BASE battlefield preparation.  When a Republican loses an election, it’s because the GOP’s core message is wrong. It’s never the candidate. Contrast this to when a democrat loses. Russian Hacking or “gosh darn it…we just didn’t grunt out a simple enough series of sounds that would explain our big brain super ideas to the gutter trash of America.”  Pay attention to any local race where a Republican lost, think Cuccinelli, think whoever, they lost because the GOP senate election fund screwed them over. Mitt was protecting his seat in Kentucky.  No money to expand into purple states, you know.  But the end result is the loss is itself useful for swamp-republicanism because they can shame the base. You did this, they’ll say.  “Your weird ideas that aren’t globalism and bank-tax cuts scared off people”.   So, this isn’t really about Trump…and Trump might have an idea it’s not about Romney being a bitch. 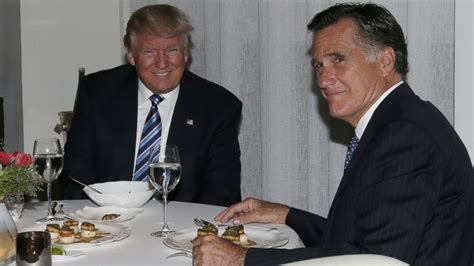 Romney, Huntsman, Eric Cantor, John Casich…all serve a purpose. to shame the base. You remember Cantor…the open borders gOP nutball who got canned in the primary…swamp-republicans were sad.

Source: Eric Cantor loss kills immigration reform – POLITICOBack ButtonSearch IconFilter IconArrow
In fact, Trump was a recoil of the base against the republican-swamp’s ultimate fighter, Jeb Bush.  Jeb came out with a $100 million dollar war chest to finally shut up the base in 2016.  His mission of course was to lose with dignity to Hillary so we can get more…well, everything the globalist fringe wanted.

So…keep that in mind.  The swamp-republican is running against you. Trump made a lot of enemies, from ending a couple of wars, deregulating things, and stopping the globalist vision, and you know, there’s something deeper and more evil out there than in 2004.  It’s not just the War on Islamic Terror that we may lose…it’s the Global War on America that may be lost.