Forest Fires and other natural weather phenomenon were on full display…at the first presidential debate. Now, there is this idea among conservatives that fires are caused by magical things like “fuel” that has been allowed to “build up” simply because of “policies”.  Now obviously, your sensible, common sense rational science based liberal knows that climate change caused mother nature to invent forest fires as a punishment for our sins.  I mean, leave it to heartless irrational conservative science deniers to ignore that higher temperatures in the cities can lead to trees over a hundred miles away to burst into flames.  Furthermore, so called Christian Conservatives continue to ignore that divine retribution takes place in this mortal plane and that there is no greater sin than not shedding your privilege. It’s clear science that privilege also leads to forest fires.

Now some science denying conservatives have pointed out that the Californian wild fires and the Oregonian fires-of-peace seem to stop at the borders of those states…well Washington state too.  Now of course, we know that that is because California and Oregon exhibit privilege and racism and probably two dozen other isms that cause forest fires to magically appear to atone for their sins in a magical, fiery baptism.  Furthermore, America’s one true scientist, Nancy Pelosi correctly summarizes that mother earth, via her fire faerie adjudicators have determined that the West Coast must burn for their various and sundry crimes against Mother Earth as science has indeed confirmed.

“Mother Earth is angry,” Speaker Pelosi says, discussing wildfires burning in California. “She’s telling us with hurricanes on the Gulf Coast, fires in the West, whatever it is…the climate crisis is real and has an impact.” pic.twitter.com/ulY4Vwh7AC

Furthermore, because of evil Californian and Oregonian sins, it’s clear why fires would stop at the border both north and south of the western united states. 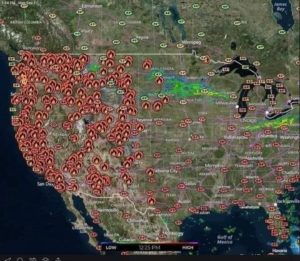 Ok, all jokes and sarcasm aside, the problem is policy.  There’s no such thing as man made global warming which is why the leftists who spout this stuff have to use open-ended obfuscatory language like “global climate change” to say it could get hotter, colder, wetter, or dryer, depending on the news that day.  Yes yes, we all know this, climate change causes bad news headlines.

But what is really sad about the lefts’ current forest fire freakout is the idea that the forest fires are driven by temperatures.  Well, swampy, what temperatures?  This is a fun point to make.  Your average leftist may believe that the earth is getting hotter than ever.  The global warming crowd has been pumping out these headlines and studies for so long now that they have to eat their own data.  This is the effect of using temperature data modifications to “cool down” the past in order to make the present data seem more warm than it is.  The biggest give away was 1993 temperature data.  1993 was hot.  There may have been an El Nino or whatever.  It was hot…the hottest since the 1930’s probably.  But you’ll notice that after that year, temperatures went down and then stabilized, we get what is called the Pause.

The results reveal slight decline in δ18O anomaly from 1998 to 2012, with a slope of −0.000 4‰ decade−1 which is significantly different from that of pre-1998 interval This downward δ18O anomaly trend suggests a slight cooling for about −0.001 oC decade−1, corroborating the recent hiatus in global warming

Source: Study: Global Warming Hiatus (aka “The Pause”) Was Real | Watts Up With That?

It’s some interesting reading.  Basically, you had a period of time where temps were stable for over a decade…and this was during the global climate change scare-a-thon.

Anywhooo…the problem is yes, temperatures may be warmer.  Or not.  After all, these people now have to adjust previous “hottest year” ever stats down to make the current hottest year ever headline stick.  So, now, the question has become … is 1993 still real?  Was it still the warmest point since the 1930s?  There is no candor on this point from the warning industry.

But ignore that. It’s another report and it’s a topic that more sciencey blogs have covered.  I’m just a mere reporter.  The biggest dumb dumb thing going on right now with the forest fires is coming up.  But first, let’s posit an idea.

Forests are pretty.  Forests are made of wood.  That wood collects and catches fire. It’s the circle of life.

People like forests because they are pretty.  Forests are made out of wood that collects and catches fire.  People put out small fires leaving that wood lying around.  More fuel collects and bigger fires erupt.

This scenario makes sense.  Forest fires make people sad and sad people vote democrat and democrats let the wood pile up.  Interesting anecdotes abound from Natives and the first colonialists who met the great forests of America…they were smokey.  Why? because they frequently burned. circle of life.  Australian settlers reported the same things.  The aborigines let the forest burn every year, it’s what you do.  Otherwise you get a big fire.

Now back to the present, dumb moment.  The left and their climate change science loons are saying that high temperatures cause forest fires.  What higher temperatures?  The ones in the cities?  How are they affecting the forests?

Now why should they start their study in 1979? After all, there is loads of data from earlier years.

WUWT, a site everyone should love and caress, points out one BBC report about muh temperatures ignores a century of temp data to say that warm cities are driving forest fires. 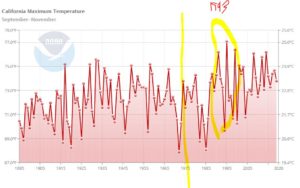 You may also have to add the relevant moisture charts too…you know…fire science stuff. 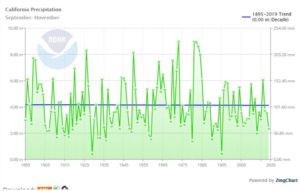 Yeah, it gets more complicated.  But here’s the thing about Cali’s fires stopping at the border…you can measure the whole world, not just cali.  And the world has less burning.

Using satellite technology, NASA determined that between 2003 and 2019, global fires have dropped by roughly 25 percent. This makes the “climate change is worsening wildfires” argument completely moot.

Source: Irrefutable NASA data: global fires down by 25 percent | Watts Up With That?

that’s right, satellites…how do they work?  Well, who knows…they’re magic. The point is is that a lot of temperature data for the world has been derived from pre-satellite data.  Meaning ice-core samples, tree-ring samples, and land based weather stations.  These land-based weather stations from time to time end up getting warmer because they’re suddenly in a parking lot…an asphalt parking lot or near concrete structures.  They take one geographic point.  They don’t take the whole planetary situation.

So, while the temperature plots for Californian cities may go up, it’s not as if the forests outside of the cities likewise go up.  To put another way, rural temps don’t go up because they aren’t concrete jungles. 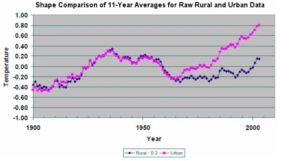 This data is hard to come by but the next time your lefty lib friends say that high temps cause forest fires, you can tell them that the forest fires aren’t in the cities, dummy!  Try finding side-by-side charts comparing urban data to rural and forest temperature data.

I was tickled about this:

Why do conservatives insist that “fuel” and other anti-science nonsense leads to wild fires? Pelosi is right, the fire fairies have passed judgement on the West Coast. Obvious that higher local temperatures in urban centers result in rural wild fires. https://t.co/8vYA6yWFVk

The forest fires are not occurring in forests? what?  It may be true that the wild fires extend into suburban areas that buttress the “forest” and now, I guess, federal lands.  let’s take a look if we can. 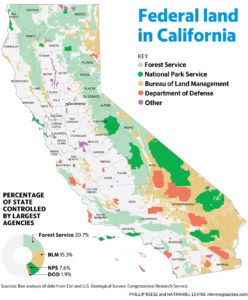 this federal map not so helpful but here’s a slightly more helpful map. 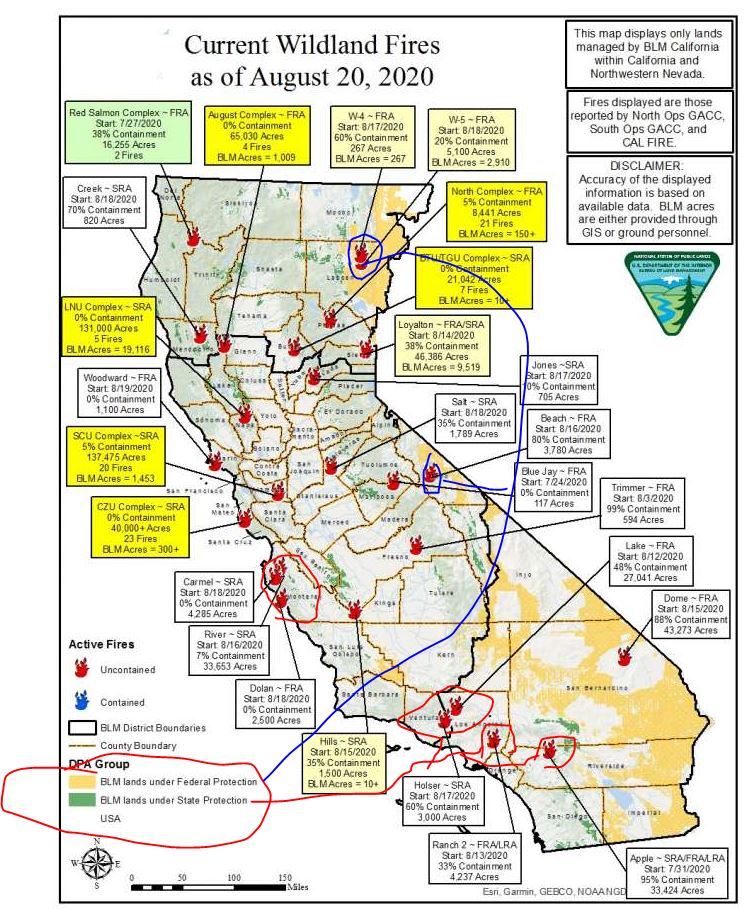 There are so many fires going on but it looks like the real devastation, the fires taking place on the coast near the wineries and suburbs are indeed state land.  There are actual federal fires on federal land but the point isn’t that fire management leads to no fires, it’s that state anti-fire policies lead to a build up of fuel that cause bigger fires.

Get it?  We don’t say proper land management doesn’t lead to fires.  Because fires are natural.  It’s that unnaturally large fires occur where you let the tinder box build up. Capiche?

So this leads to another point I want to fact check, the akkshually brigade are trying to conflate big fires and small fires. They say that akkkshyallly (no gif, sorry, doesn’t deserve it) there are fires in Canada and Mexico.  Well, yeah, fires are supposed to happen.  Look again at the map, dummies…The big fires are in the USA’s west coast. Smaller fires on federal land or in Canada don’t disprove the problem.